In this post I walk through the process of handling unbounded streaming data using Apache Beam, and pushing it to Google BigQuery as a data warehouse.

Data engineers deal with two main types of data processing when they’re designing ETL pipelines: batch and stream. The key distinction is that batch processing is done on data sources that are fixed and finite in size (importing data from a .csv file, for example), whereas streams are unbounded data. This could be something like temperature data from an IoT sensor that sends an updated value every 5 seconds and never ends.

In this post I’m going to stream mock second-by-second stock data using Apache Beam and Google Data Flow as the data runner. Apache Beam is a nice SDK, but the methodology and syntax takes some getting used to. I’m going to do the best I can to explain this if you’re unfamiliar.

The output of our data pipeline is going to dump into Google Big Query - a powerful data warehouse that facilitates all kinds of analysis. I hope you enjoy this!

To create our stock market price stream, I’ve created a simple class that creates a random-walk stock price by calling the __next__ method.

Calling the __next__ method will produce a new value of the stock based on the prior value that varies according to a distribution defined by a mu and sigma that you specify. The output looks like this:

For this tutorial, what we want to do is run this stock price generator indefinitely in a loop and have it publish the stream to Google Pubsub. I’ve created the following module to do this, which can be run locally if you have the gcloud SDK installed, or from the cloud shell on Google Cloud Console.

This module does the following:

This will run until we shut it off - which means it’s “unbounded”. The next thing we’re going to do is build out our Apache Beam data pipeline for processing this stream.

I want to cover some introductory ground regarding the Python syntax for Apache Beam - the code that follows will make more sense if I do.

Apache Beam is an open source, unified model for defining both batch and streaming data-parallel processing pipelines. Using one of the open source Beam SDKs, you build a program that defines the pipeline. The pipeline is then executed by one of Beam’s supported distributed processing back-ends, which include Apache Apex, Apache Flink, Apache Spark, and Google Cloud Dataflow.

Beam is particularly useful for Embarrassingly Parallel data processing tasks, in which the problem can be decomposed into many smaller bundles of data that can be processed independently and in parallel. You can also use Beam for Extract, Transform, and Load (ETL) tasks and pure data integration. These tasks are useful for moving data between different storage media and data sources, transforming data into a more desirable format, or loading data onto a new system.

In a nutshell, Apache Beam is a framework that allows you to:

In a fast, parallel way. Google Cloud Dataflow is a supported runner for Apache Beam jobs, and that’s how we’re going to run the job described in this tutorial. That being said, one of the nice things about Apache Beam is that it’s indifferent to the runner being used - you can swap out the runner for something else entirely just by changing a flag value. You’ll see this when we create our bash script to run this pipeline job.

A common design pattern you’ll see with Apache Beam pipeline scripts is for the pipeline parameters (and other parameters) to be passed as command-line arguments. The argparse library is leveraged here for breaking up the command line arguments passed via a shell script. Before we proceed any further, let’s show you that shell script - the pipeline code will make more sense with this in mind.

Now that we have introduced this file, let’s introduce the main script that this will be executing:

Breaking This Script Down

Starting with the run() method:

Or, when applying multiple transformations to the same input:

In our script, we’re applying each to step to p:

Note that are data ingestion line here is:

Read from a .csv file

Between these I/O types, you should have plenty of options of ingesting data from your source.

Running the Bash Script to Execute the Pipeline

The bash script can be run locally, or from Cloud Shell in your Google Cloud Console. I prefer to clone my files to the home directory in my cloud shell and run things from there.

Either way, when you navigate to your project root and run:

This will execute the pipeline. If you navigate to Dataflow in your Google Cloud Console, you’ll see a diagram of all the transformations steps you specified in your pipeline code. Mine looks like this: 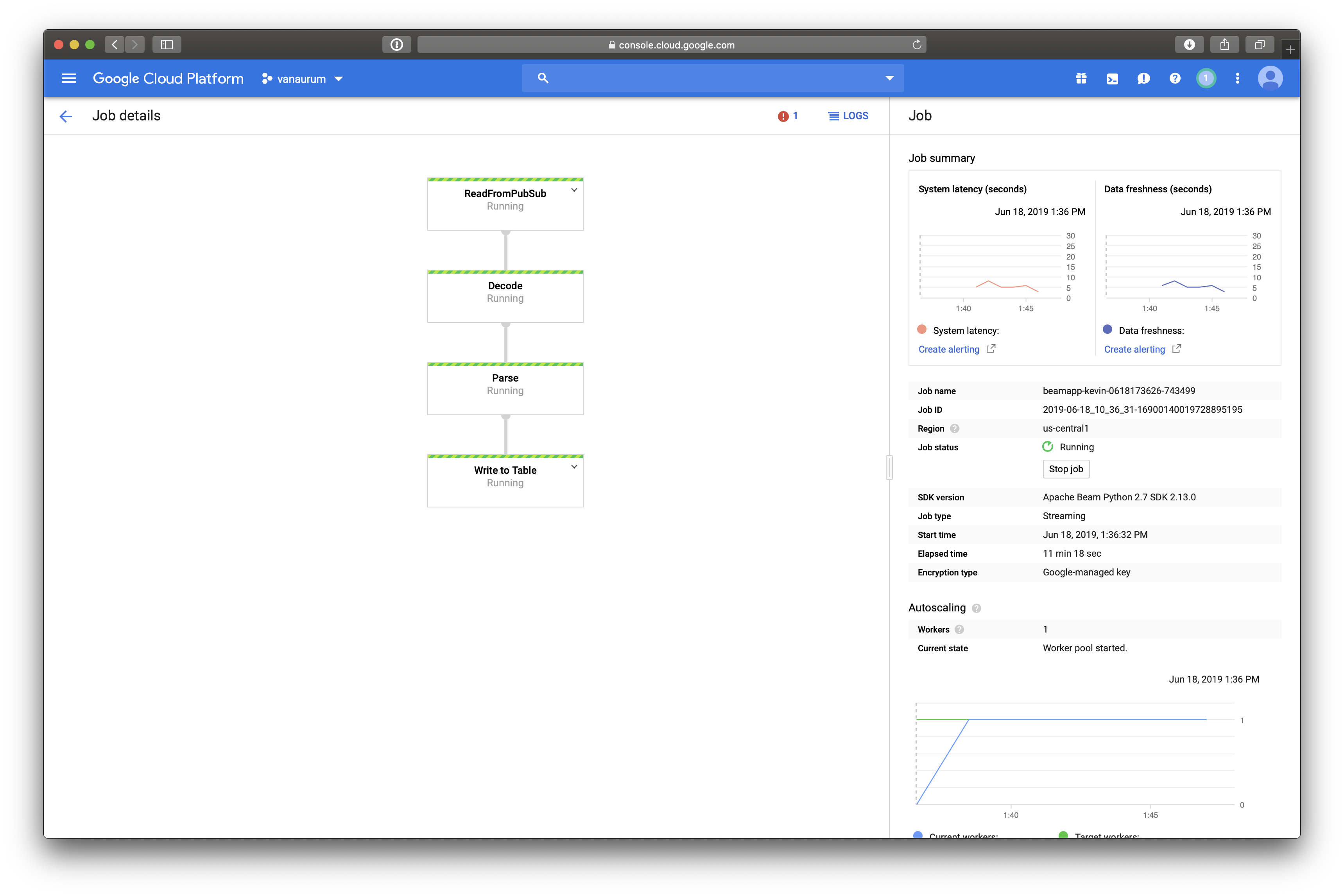 Because the output of our Pipeline is going to Google BigQuery, let’s check there to see if data is appearing in our table: 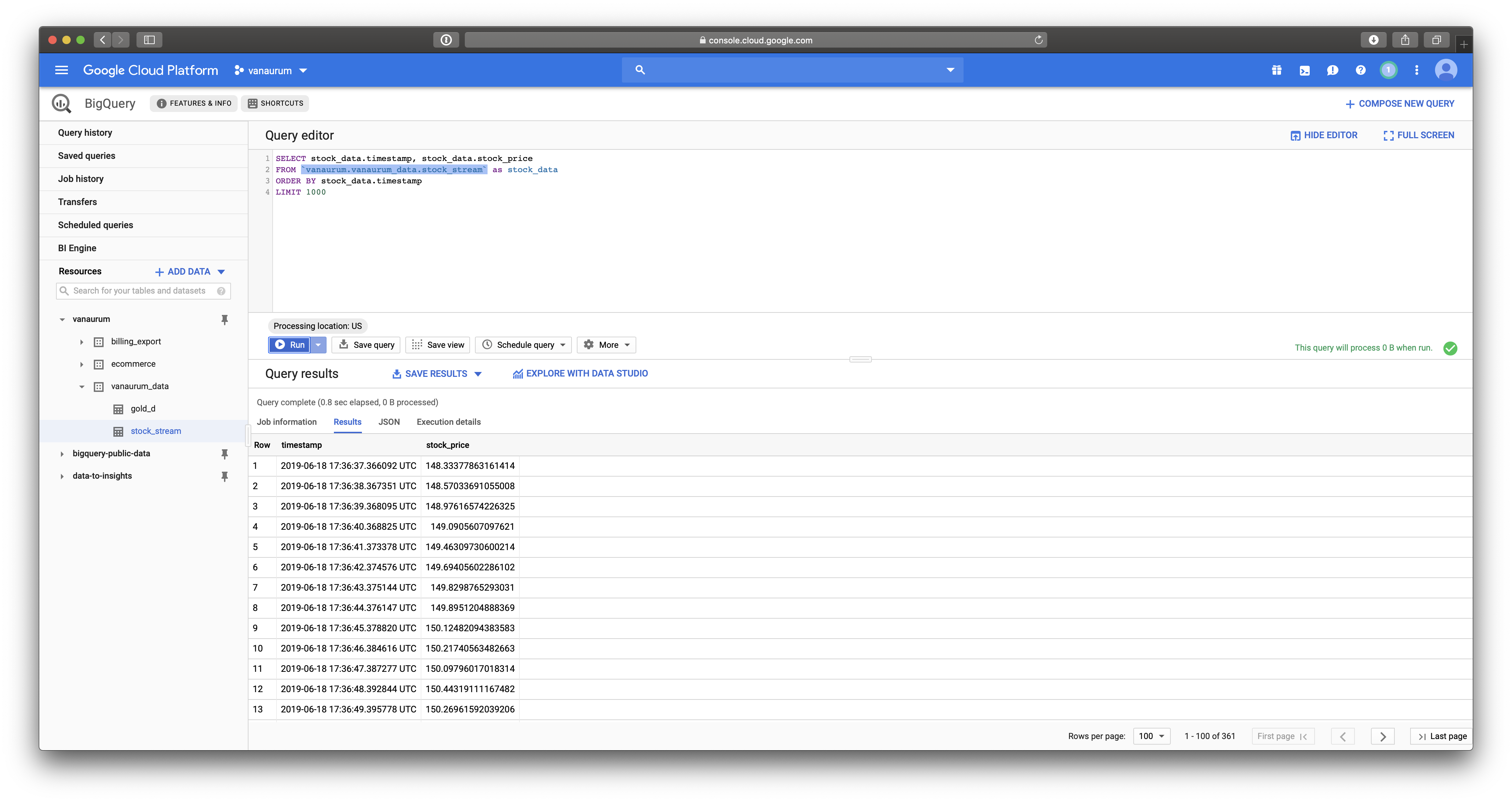 Which it is - great!

The code above is all we really need to execute a simple Apache Beam pipeline that loads streaming data into Big Query. Apache Beam, however, is much more powerful than that. There are some foundational concepts that we glossed over in the code explanation above - I want to discuss those here.

This is what they mean when they say the function needs to be serializable.