In this post I do a walk-through demonstrating how to distribute a data ingestion process across a Kubernetes cluster to achieve fast, inexpensive, and fault-tolerant data pipelines on Google Cloud Platform. This model can be used for many kinds of distributed computing - not just data pipelines! I enjoyed learning this because it cut my data processing costs for VanAurum significantly. I hope you enjoy it!

Who should read this?

I just finished rebuilding the back-end architecture for VanAurum on Google Cloud Platform - for now my backend is still running on Heroku, but there was one big reason for switching it - cost!

VanAurum’s existing backend uses a horizontally scalable worker process to ingest, transform, and load data into its primary database. Heroku is a great platform, but the dyno tier required to achieve this is really expensive. So what’s so much better about Google Cloud Platform?

Pre-emptible Compute Engines (PCEs), as Google calls them, are essentially excess compute engine capacity that Google has laying around that hasn’t been provisioned. They make it available to anyone at discounts of close to 80%. The catch is that at any time Google can send a SIGTERM termination notice to your virtual machine and take that compute engine back. If you have a process running on it - too bad!.

For some applications, being abruptly terminated isn’t something that can be tolerated. But if you can design your program to be fault tolerant you can leverage the major cost savings of PCEs to build powerful data pipelines for a lot less money. So this is what I did.

The rest of this post details the architecture of my new data pipeline, and the code I implemented for executing it.

Straight from Google, they say this about preemptible VMs:

A preemptible VM is an instance that you can create and run at a much lower price than normal instances. However, Compute Engine might terminate (preempt) these instances if it requires access to those resources for other tasks. Preemptible instances are excess Compute Engine capacity so their availability varies with usage.

Preemptible instances function like normal instances, but have the following limitations:

Unpacking this, there are clearly some design constraints to consider for our ETL pipeline if we’re going to use these.

I’m going to move on now that we have an understanding of what we’re dealing with.

Now that we have some PCE constraints informing our design decisions. Let’s walk through some of the general principles of workload distribution.

Imagine a situation where you have 50 compute tasks to execute, and you have 5 computers at your disposal. An easy way to assign this would just be to say, “Computer 1 gets the first 10 tasks, computer 2 gets the next 10 tasks…so on and so forth”. In other words, you just give each computer 10 tasks to complete. There are some key problems with this methodology:

The best solution is to adopt a dynamic job assignment, versus a static one described above. A good anlogy for dynamic work assignments is how an ant colony consumes food.

Ants eating a pile of crumbs

You’ve likely seen this before - but when food is on the ground that is within reach of an ant colony, think about how they “process” the food and bring it back to the colony. They don’t look at it and divide the pile into sections, and assign those sections to ants. Instead, they swarm it. All the ants grab whatever piece is available according to their own ability and carry it off to the colony. If there are enough worker ants, they will cover the entire surface area of the food as they pick it apart. They’re only limited by the consumable surface area of the food and the number of ants in the colony. If an ant dies or gets stepped on before bringing the food back, another ant comes by and picks up what was dropped and continues on. This is an exceptionally efficient process and you see this swarm method almost everywhere in nature: birds, fish, bacteria, etc…

With our dynamic work assignment - our cluster of preemptible compute engines is our ant colony, and the pub/sub messages queue is our pile of food. We want our compute nodes to bite off pieces of the job queue as fast as possible - and the more of them the better. They’ll take jobs when they’re ready and until the queue is gone, and have no other restrictions.

In this design, our “swarm” of computers is going to be managed by Google Kubernetes Engine.

The Pipeline Being Built

Before we dive into the details, I want to walk through the high-level task at hand. We want to build an ETL pipeline that does the following:

The nice thing about this is that it’s the same process for each asset class that we download price data for. Sounds like something that can be distributed in a cluster, right?

At a high level, our process will look like this on Google Cloud Platform: 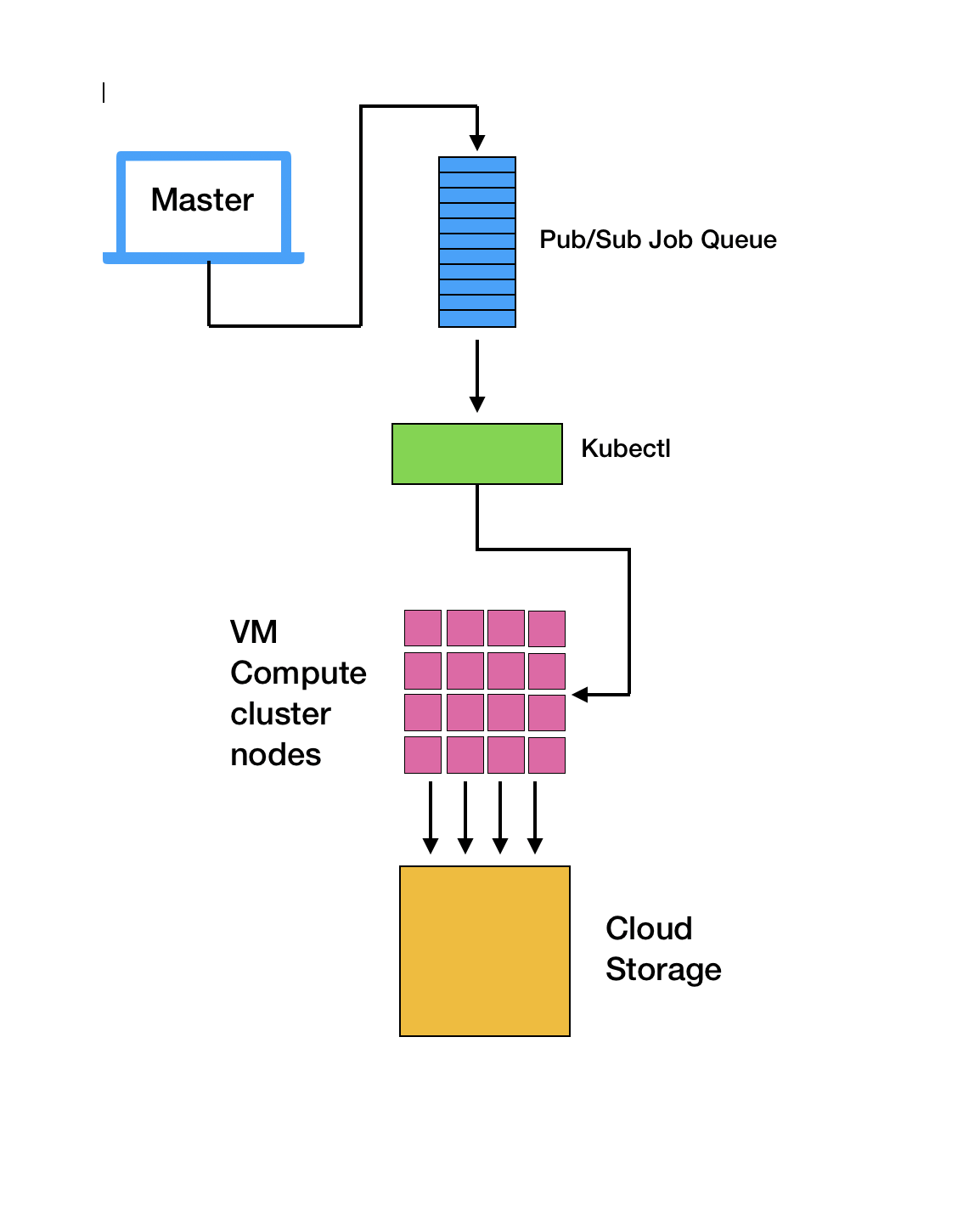 Each of the pink nodes in this diagram is a dockerized container. Each has the same dedicated pipeline program on it and all the dependencies required to execute the code. 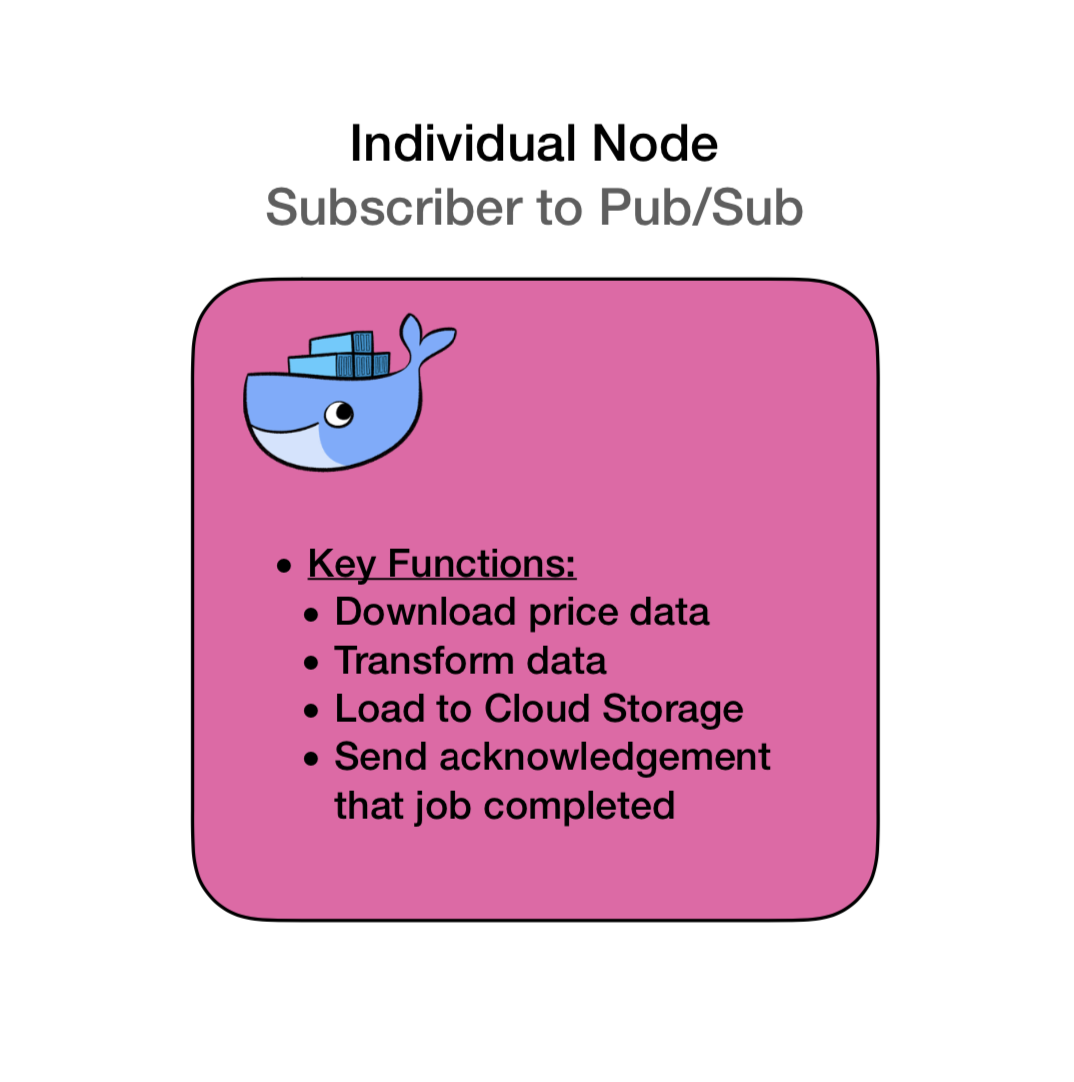 If you don’t already have a Google Cloud Platform billing account you’ll need to create one. Follow the instructions here if you don’t: Create Google Cloud Billing Account.

There are programmtic ways of building these queues, but here we’ll use the console user interface because it’s way easier. Navigate to your cloud console - mine looks like this: 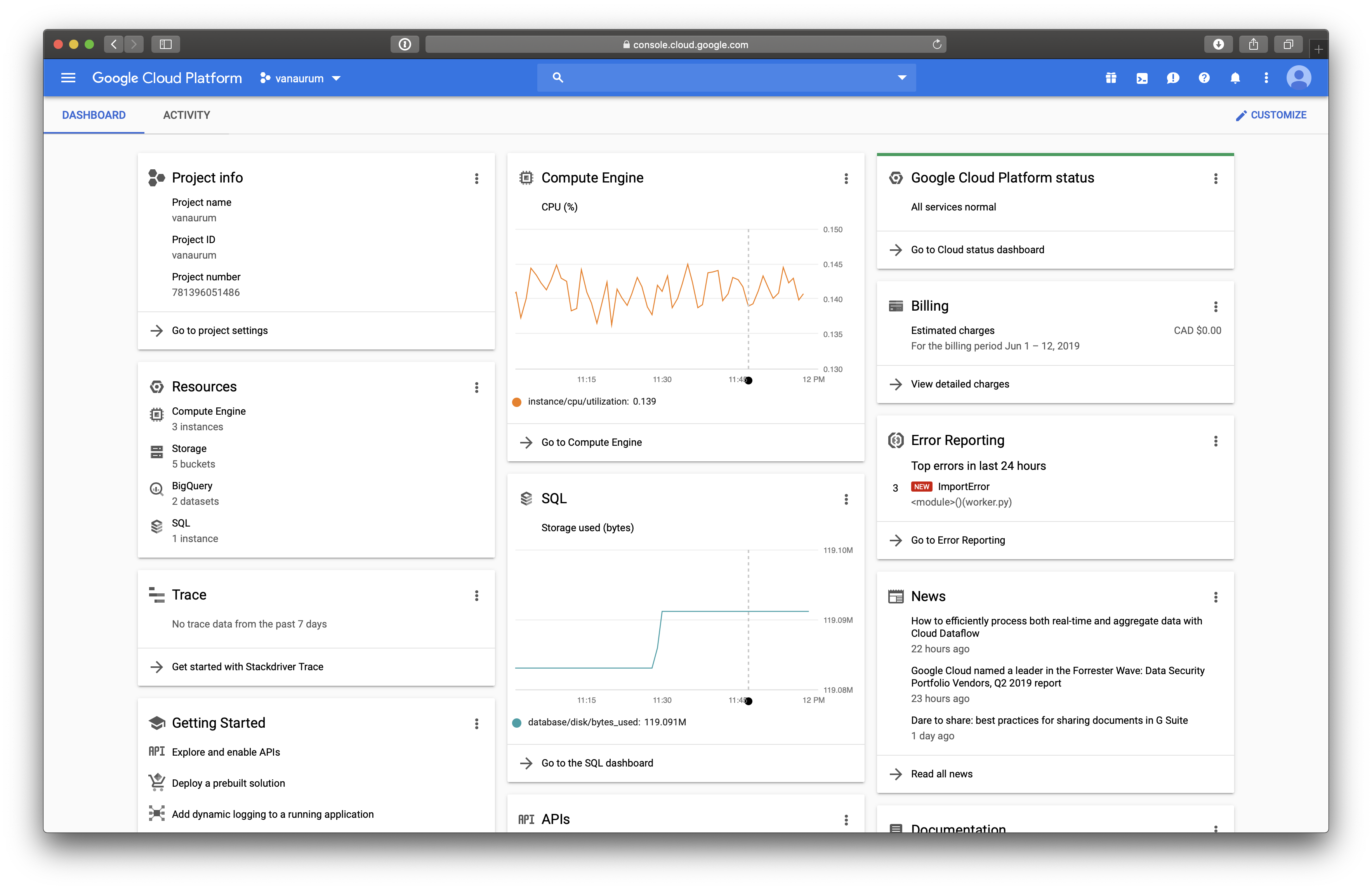 Next, click the menu on the top left-hand corner and navigate to Big Data –> Pub/Sub. Click Create Topic and give it a name. The topic I use in this example is vanaurum-etl-queue. You should see it in your list of topics like this. 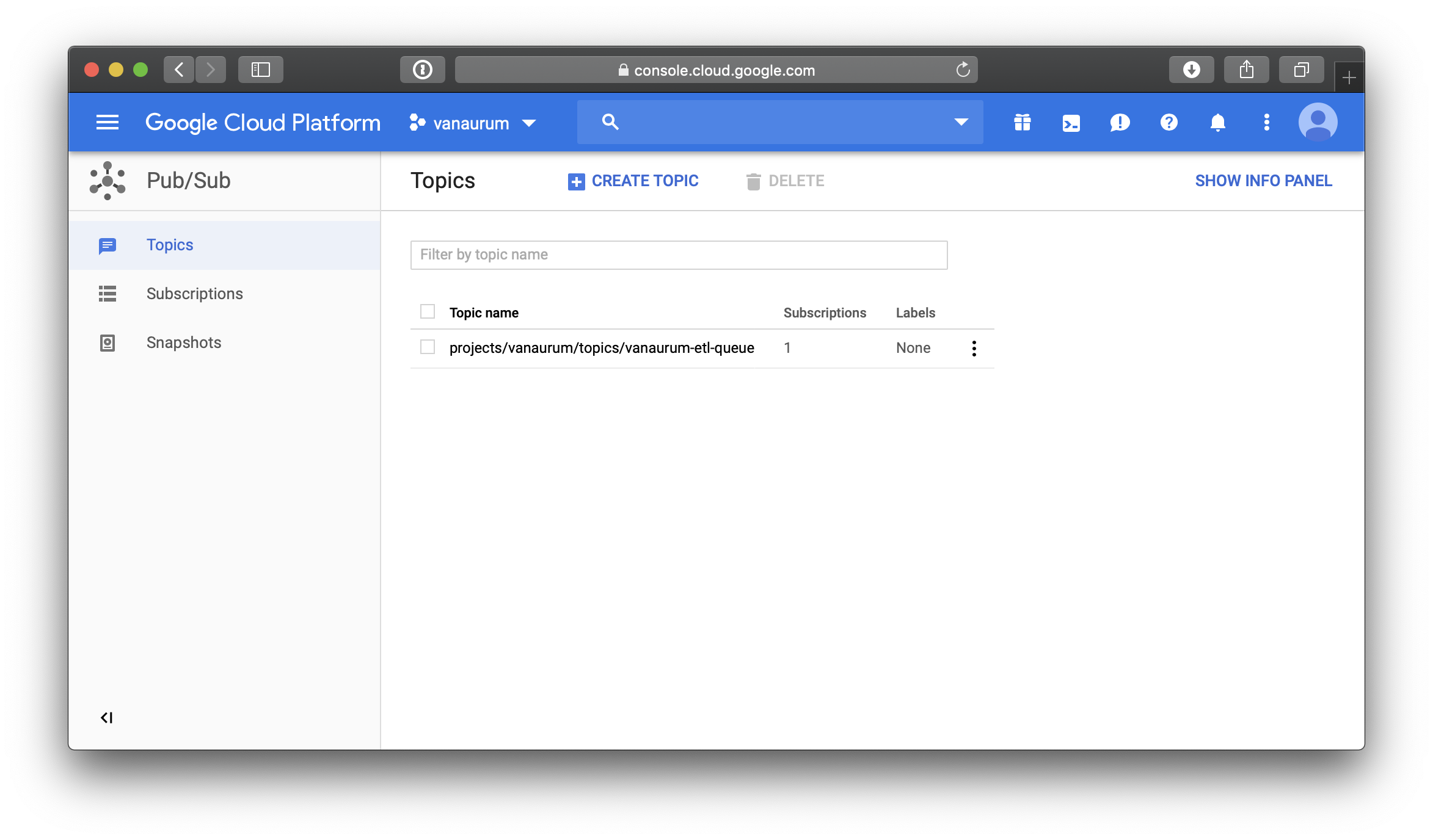 That’s it! Easy enought, right? When a publisher publishes messages to a topic, those messages will be available to every subscriber to that topic. In our example, we only need one topic, vanaurum-etl-qeueue. Our cluster node will be dynamically subscribing to the topic and pulling messages from the queue. Let’s look at how that’s implemented.

The first thing I’m going to walk through is the creation of the pub/sub message queue. This is going to be a modified version of the stand-alone code segment I’ll show later - this is just to illustrate how these messages are going to get created and published, and to show you what they look like. There are also some nuances to Google’s API that are worth mentioning.

Let’s break this down….

main() : This is a toy function that does the following:

It’s easy to overlook, but this message.ack() call is what allows us to make this pipeline fault tolerant. This is all that’s required to account for any of our premptible VM instances being terminated before their job completion. Pretty sweet right?

The output from our publisher is going to be a list of message_future.result() codes from our pub_callback() method. They looks like this…

The subscriber outputs the following received messages. The data payload in here is our asset tag that each node will execute a pipeline on.

Good - so now we have a publisher that can generate a queue of asset names that need to be downloaded and processed. We also have a subscriber that can pull these asset names from the queue for us. The next thing we want to do is create out Kubernetes cluster.

To create a Kubernetes cluster using the GCP UI, navigate to Compute –> Kubernetes Engine from the navigation menu. Click Create cluster at the top of the page.

You’ll be brought to a page that looks like the one below. Some key settings are: 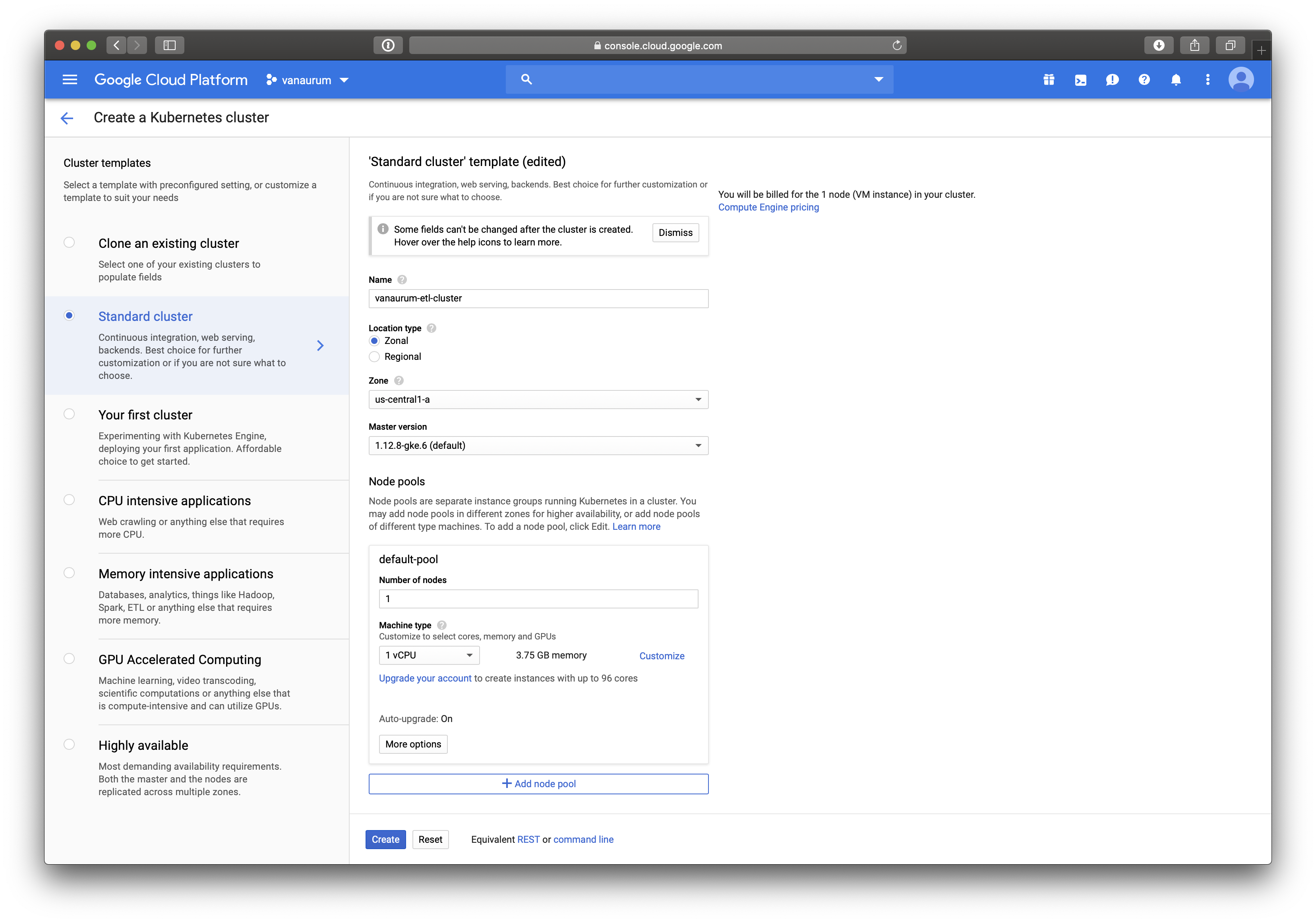 At the bottom, click on Add Node Pool. You’ll be brought to a screen like this one: 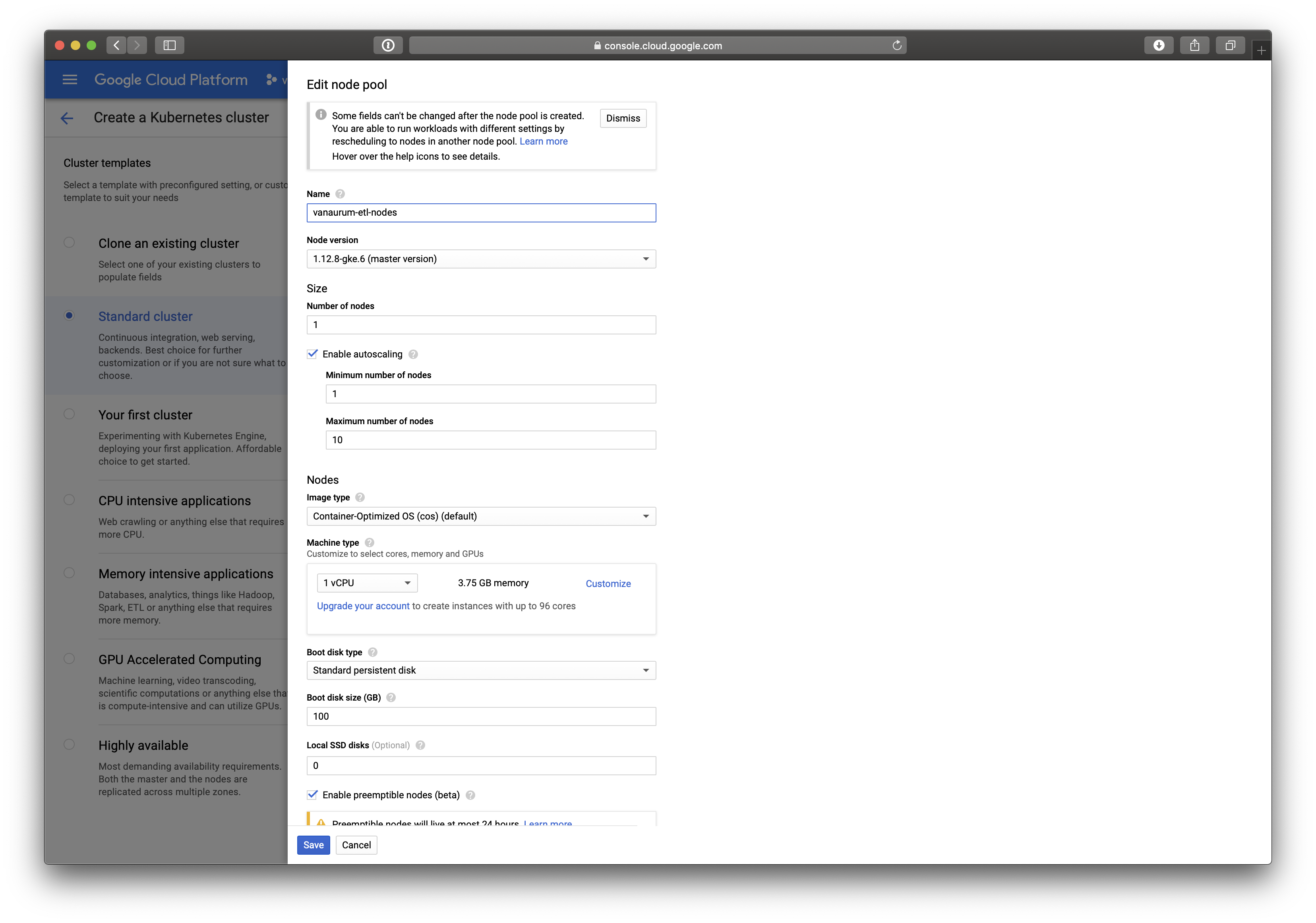 Summarizing our Steps so Far…

The next thing we need to do is write the actual module that will be “dockerized” and pushed to kubernetes. This will be the image that gets loaded on each of our worker nodes. We’ll also write a stand-alone module for the master node which can be run on a VM compute instances or local laptop anywhere - so long as it’s authorized to your gcloud account.

The code for our master node is relatively simple and is a subset of the code I showed earlier.

This script can be run using the following command line from the terminal:

The worker.py module is going to be a little more involved, but it should still be familiar code to you.

Note: There are some helper methods used here for the main pipeline but I haven’t included the code because they’re not important to the scope of this article. In reality, any function can be placed in the subscriber callback to handle the messages.

A Note on Logging: If you haven’t read The 12 Factor App, I highly suggest it. It’s a short webpage about portable and modular code. Rather than using print() to output, self-contained modules should write any code output to the console by default. How console logs are viewed, handled, or even activated should be controlled at the application level.

In our worker.py module there are four helper methods listed:

The first three are specific to my project and aren’t entirely relevent to this article, but I’ll walk through the upload_file method because it integrates with Google Cloud Storage.

Packaging and Containerizing the Program with Docker

Running code on Kubernetes clusters requires an image to be created. All this means is that we have to package up our code into a self-contained entity that tells the virtual machine everything it needs to do to execute the code. It needs three basic things:

We’re going to use Docker for this. Docker allows us to package our code into a single file and push it to Google Cloud Platform. An instance of each of this Docker images is a “container”, and these will be copied dynamically to each node in our Kubernetes cluster as needed behind the scenes.

Your package needs a Dockerfile in the root directory. Mine looks like this:

The Dockerfile is just a set of commands to run in the VM shell to set up the node to run your program. You can read this script as:

So to reiteratate, this script will be run on each node kubernetes decides to allocate to us. Docker is pretty awesome, but sometimes it can be finicky to get the build right.

You can build this image on your machine (download and install docker first) by running this in the commnd line (Replacing the two variables with ones specific to your project):

This builds this image with a path name suitable for Google Container Registry. When the build is done, you can push it to the GCR using the command:

You can test if the build will work by running it locally using docker:

The next thing we need to do is deploy our docker image to nodes on the Kubernetes cluster. This where the value of Kubernetes comes in. Normally we would have to ssh into each node and execute the scripts manually. Kubernetes manages all of this for us, but first we need to tell is what to do.

Kubernetes requires a job.yaml file to be uploaded which has the details of the job. Mine looks like this:

This file is relatively straightforward, we need to declare a name for the job under metadata, the number of parallel nodes under parallelism, the name of our container, and where to find it. To push this file to Kubernetes, you’ll need to install the tools on you machibe (either locally or on a VM).

To run the cluster, all we have to do is run master.py to publish our assets to Pub/Sub, and then push the yaml file to Google Cloud:

That’s it! If you have any questions regarding this content - feel free to reach out to me in the e-mails listed in the footer.